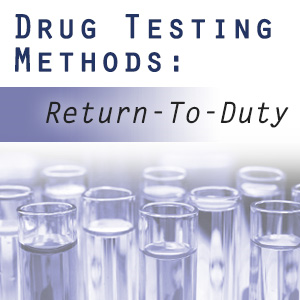 Return-To-Duty Drug and Alcohol Testing is for employees who have previously tested positive for illicit substances or violated a company’s drug and alcohol policy. For both the general U.S. workforce and the federally-mandated safety sensitive workforce, return-to-duty drug testing is a single test that is performed at a scheduled time, typically following the completion of a drug abatement program.

Positivity Rates
Results from the 2014 Quest Diagnostics Drug Testing Index™ (DTI) show that, as with all previously discussed reasons for testing, return-to-duty urine drug test positivity rates are higher in the general U.S. workforce (6.4 percent) than in the federally-mandated workforce (2.9 percent).

Testing Prevalence
Data gathered from the 2014 Quest Diagnostics DTI show that return-to-duty testing accounts for only 0.3 percent of all urine drug tests in both the general U.S. workforce and the federally-mandated, safety-sensitive workforce. As with reasonable suspicion and post-accident drug testing, return-to-duty drug tests are not performed by all employers and are often used on a more specific, as needed basis.

Specimen Types
Urine is the only specimen type permitted for federally-mandated drug testing programs, regardless of the reason for testing. Leveraging data from the DTI for return-to-duty drug tests in the general U.S. workforce, positivity rates in 2014 were as follows for both specimen types:

Why have a Workplace Drug Testing Program?

The benefits and rewards of an employee drug testing program are apparent to the businesses who already have them. Most experience lower turnover rates, less absenteeism, and great productivity. These benefits were once only seen by regulated industries which were required to drug test, but today, many companies are opting to start a program to improve the recruiting.
In addition, many states offer discounts on workers’ comp premiums for businesses that establish drug-free workplace programs. Drug-free policies are a great way to reduce drug use and medical costs while earning Workers’ Comp premium credits. Attentive Safety Drug and Alcohol Testing can help you foster a drug-free work environment and lower your Workers’ Comp costs.