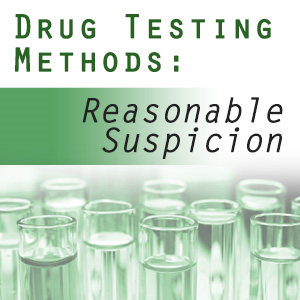 Reasonable Suspicion Drug and Alcohol Testing is given when there is reason to believe that an employee is under the influence of drugs while on the job.

In drug free workplace programs, supervisors are trained on identifying the signs of drug use. This can include what the supervisor sees, hears, smells or notices as a trend in the employee’s performance.

Supervisors trained in drug free workplace policy must witness the behavior, and only then can they make the call to conduct a reasonable suspicion test. Having more than one supervisor witness the signs can help strengthen the integrity of the case. Rumors or gut feelings are never a legitimate cause to conduct this type of test.

Some signs of drug and alcohol use may be:
These problems alone are usually not enough to conduct a reasonable suspicion test. Explicit signs of alcohol and illicit drug use should also be observed. These are a few symptoms that may be present, although this university HR list is by no means comprehensive:
It is critical to notify the individual and conduct a test soon after observing the signs of drug use, so as to not allow the employee to take steps to alter the results.
Confronting an employee about suspected drug use can be difficult, but should be done privately, and with a focus on behavior and appearance, rather than drug use. The use of a drug test should be explained as a way to rule out drug or alcohol abuse as a cause of behavioral changes.

Why have a Workplace Drug Testing Program?

The benefits and rewards of an employee drug testing program are apparent to the businesses who already have them. Most experience lower turnover rates, less absenteeism, and great productivity. These benefits were once only seen by regulated industries which were required to drug test, but today, many companies are opting to start a program to improve the recruiting.
In addition, many states offer discounts on workers’ comp premiums for businesses that establish drug-free workplace programs. Drug-free policies are a great way to reduce drug use and medical costs while earning Workers’ Comp premium credits. Attentive Safety Drug and Alcohol Testing can help you foster a drug-free work environment and lower your Workers’ Comp costs.